Home Shipping 13 million TEU too many by 2023: Sea-Intelligence

Caveat: Hapag-Lloyd’s operational performance in relation to their equipment is taken as a proxy for the entire market.
Contemplating the normalisation of the supply chain in 2022-Q1, a Sea-Intelligence analysis based on data provided by Hapag-Lloyd found that the German carrier needed an equipment fleet of just over 3 million TEU to move their cargo.
“If the supply chain bottlenecks were removed now, Hapag-Lloyd would need 17 percent fewer containers in their equipment fleet compared to what they have presently. If this is representative of the global market, there would be a need for 17 percent fewer containers than what we currently have,” the analysis said.
The global container fleet reached 50 million TEU in 2021, and if 17 percent of this becomes redundant, that equals 8.5 million TEU in excess equipment. “Accommodating for the 4.5-4.8 million additional TEU to be delivered in 2022, we end up with 13 million TEU of excess containers in 2023.” 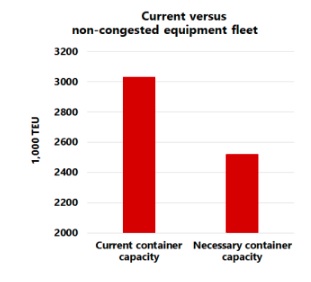 Over the past two years, congestion in the supply chain has led to a significant extension of the transportation time – not only in relation to the ocean-side delays but also in relation to inland congestion and delays. “When the supply chain gets longer, there will naturally be a need for more containers, simply because each container is needed for a longer period of time. Conversely, this also means that once the supply chain normalises, there will be a release of a significant number of containers, which are no longer needed,” says Alan Murphy, CEO, Sea-Intelligence.
The analysis comes with the caveat that Hapag-Lloyd’s operational performance in relation to their equipment is taken as a proxy for the entire market.
“We started the analysis by looking at the development in both the size of the equipment fleet as well as the number of transported containers over the past 12 years. This was followed by calculating the equipment efficiency by looking at how many full loads of cargo were moved per container in the equipment fleet.
“In 2010-2014, the effectiveness of the equipment fleet was relatively constant at 1.3 loads per container per quarter followed by a lot of volatility in 2014-2017, and stabilising again at an average of 1.18 full loads per container in 2018-2019.”
In 2020-2022, the effectiveness declined significantly to 0.95 loads per container in 2021-Q4, slightly improving to 0.98 in 2022-Q1, the report said.
Cargo surge to be more chaotic this year: Container xChange survey
The summer peak season cargo surge this year will be even more chaotic for global supply chains than the 2021 peak shipping season, according to forwarders, traders and shippers surveyed by Container xChange. The survey covered approximately 200 players from the container logistics industry.
Titled xChange Industry Pulse Survey, the study found that 51 percent respondents expect the 2022 iteration of the peak season to be “worse” than last year. While 26 percent predicted this year’s peak season would be less chaotic than in 2021, 22 percent expect the level to be the same.
The peak container shipping season traditionally occurs in the third quarter of each year as retailers build up inventories ahead of the fourth quarter holiday and shopping season. Last year, cargo surges resulted in record container shipping freight rates, delivery delays and port congestion, the report said.
Over 62 percent respondents said they were still relying on the spot market or doing nothing specific to ensure shipments reach clients.
The top challenges identified by respondents, aside from China’s ongoing lockdowns, were container availability, depots being full, inflation, the Russia/Ukraine crisis and rising prices, the report said.
Source: ITLN