Home Others Developers plan to use old shipping containers to build a new Richmond...

A plan to convert an old power substation in Carver into a mixed-use neighborhood hub is progressing.

Developers behind the project unveiled designs over the weekend for what they’re now calling Carver Station, a planned rehab and conversion of the century-old building and adjoining yard at Clay and Harrison streets into a food hall, gathering room, and coworking-office space built in part out of reused shipping containers.

The plans, which were shared at a community meeting Saturday and are posted on a website for the project, show the two-story building reborn as a food-and-beverage-style space that would serve as a community lounge by day and a small-plate restaurant and wine bar by night.

The rest of the property would be filled with new construction that would house coworking spaces and “micro-offices,” including office “pods” made from upcycled shipping containers. The new construction would rise as high as three stories above the yard. 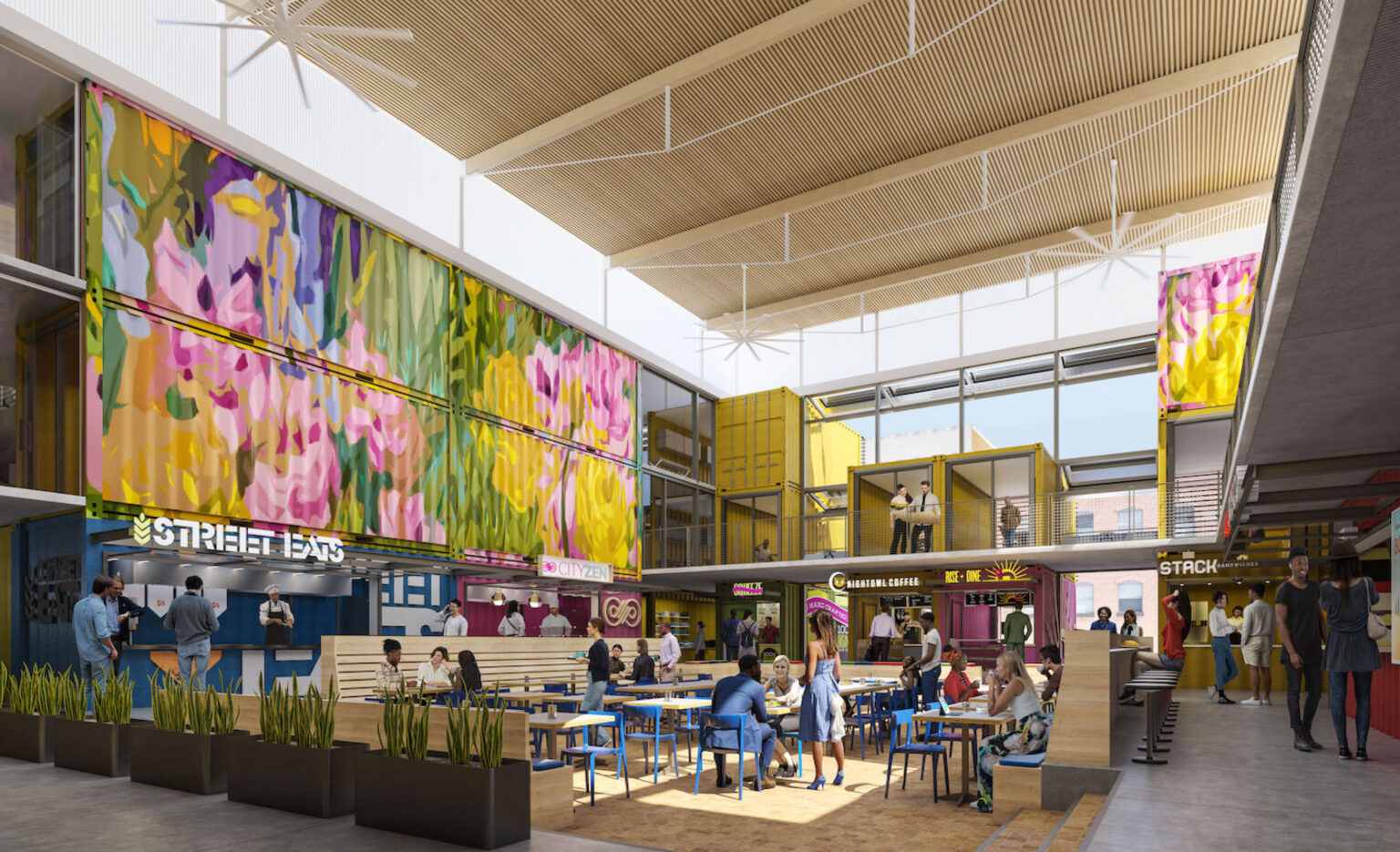 The project is led by Michael Hallmark and Susan Eastridge, the development team behind the arena-anchored GreenCity project in Henrico and an office development planned to replace the Public Safety Building downtown. The developers purchased the half-acre Carver Station site last year for $1.6 million.

Hallmark, who resides in Carver, is driving the concept for Carver Station with his Future Cities firm, which includes collaborator Sean Duncan and recent addition Jordan Greene, a VCU alum and interior designer who is serving as the project’s development manager.

Architecturefirm is designing the project, and W.M. Jordan Co. is lined up as the contractor.

The group is preparing applications for a special use permit that would be needed from the city for the project to go forward. In a release, the group said the applications would be submitted in the next week or two, with Roth Jackson attorney Mark Kronenthal providing representation. 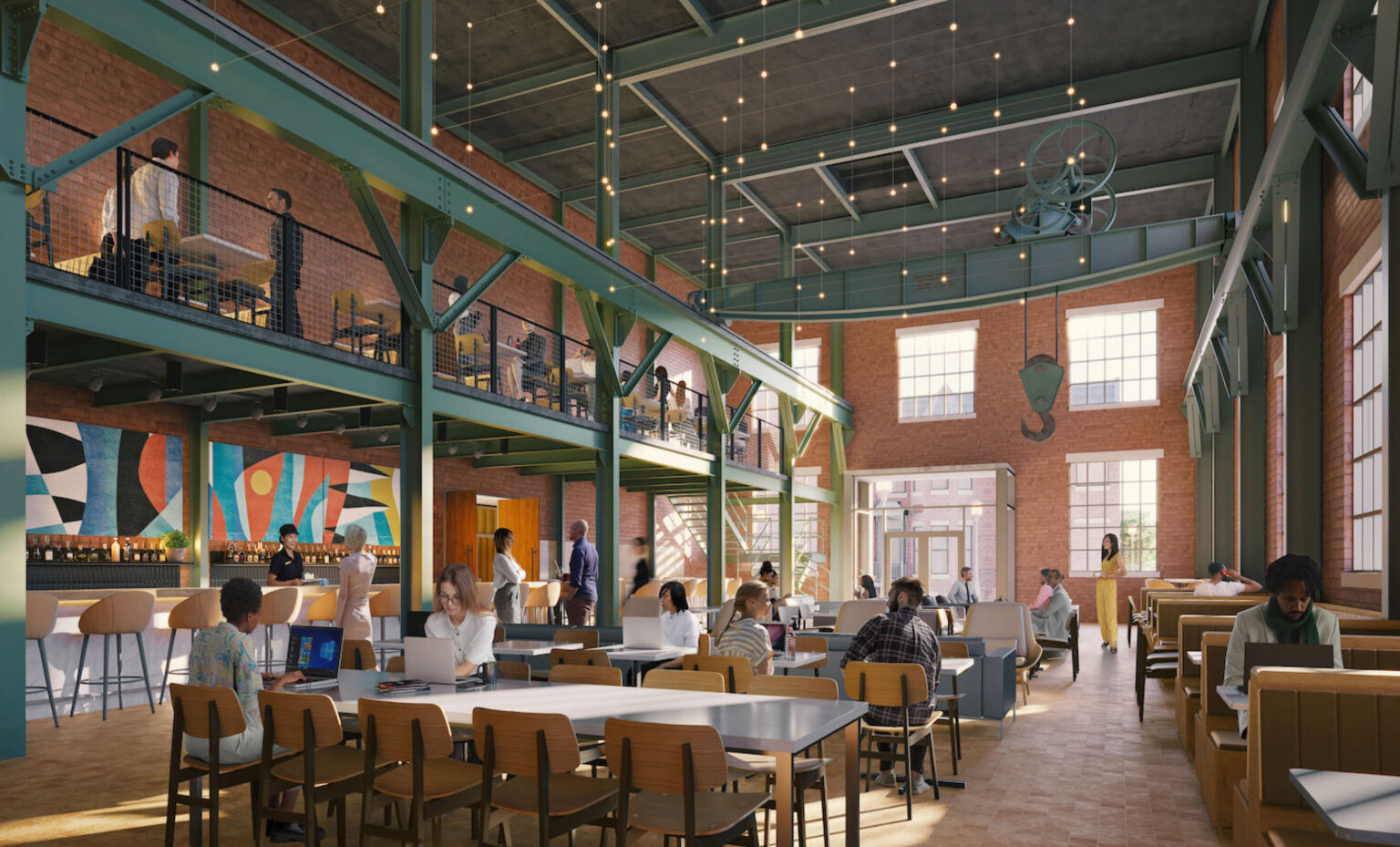 The group is designing the project based on feedback from the Carver Area Civic Improvement League and seeking further input from area residents and businesses. It’s also working with marketing firm Rocket Pop on branding and local programming for the project.

Designs show the wine bar would be tucked under the mezzanine of what’s being called the “Crane Room,” referring to the overhead steel-beam crane system that remains operational and is to be preserved as part of the project.

The room would also be able to accommodate community meetings and events. Bricked-in windows on the building’s ground floor would be reopened, and skylights would be placed back on the roof.

The adjacent food hall and market would consist of about a dozen food-and-beverage user spaces, along with spaces for retail vendors. Tenants for those spaces have yet to be selected.

The office spaces would be located on the second and third levels of the new construction. The coworking space would use a membership model with different fees for container pods, reserved desks with lockable storage or floating access to all work and common areas.

The project also is planned to involve features such as rooftop solar and rainwater harvesting for reuse on site.

Formerly a substation for Dominion Energy, the decommissioned property dates to 1910 and is listed on the National Register of Historic Places as one of a dozen that make up the Carver Industrial Historic District, making the project eligible for historic preservation tax credits. Hallmark has said a construction budget for the project has not been finalized.

Pending city approvals, construction is anticipated in the first quarter of 2023 with a 12- to 14-month buildout.

The World will Emulate the example of PM Gati Shakti in the coming years: Shri Piyush Goyal

Shri Sarbananda Sonowal underlines efforts to provide social justice by the Modi Government to build an Atmanirbhar Bharat, interacts with the beneficiaries of the...

CII estimates India’s GDP growth to be in the band of 7.4% – 8.2% depending upon the global oil prices: says newly elected CII...