India’s merchandise exports contracted 12.2 per cent year-on-year (YoY) in December to $34.48 billion as slowing external demand amid recession fears in developed economies continued to weigh on outbound shipments, the data released by the commerce and industry ministry showed. Still in the first nine months of the current financial year, exports grew nearly 9 per cent.

The latest decline in the value of outbound shipments can also be attributed to the statistical effect of a high base because December 2021 witnessed the second-highest monthly exports in the previous financial year at $39.3 billion.

“There are a lot of headwinds. Despite that, our export competitiveness has held its head high… It is clear that there are headwinds and there is a recession in our export countries (markets). Therefore, we need to look at export targets in a manner that we are able to reap benefits in relation to countries witnessing GDP growth, such as Brazil and other Latin American nations,” Commerce Secretary Sunil Barthwal said on Monday.

Imports last month also contracted 3.46 per cent to $58.24 billion, amid falling commodity prices. The trade deficit widened to $23.76 billion, against $21.06 billion in November last year but was still lower than the all-time high of $29 billion in September.

Barthwal said that the decline in imports could be because of a combination of factors. For instance, some imports are related to exports. If there are recessionary trends and

the export outlook is weak, demand for the import of raw materials of outbound products also declines.

“We have consciously chosen to reduce gold imports. Some products, such as pharmaceuticals and crude oil, are being purchased at lower prices. Imports also decline if import substitution is taking place,” Barthwal told reporters.

Aditi Nayar, chief economist at ICRA, said the softness in prices of some commodities contained imports to an extent, stabilising the trade deficit near the previous month’s level — well below the average $26-billion gap seen in the six months ended October 2022. 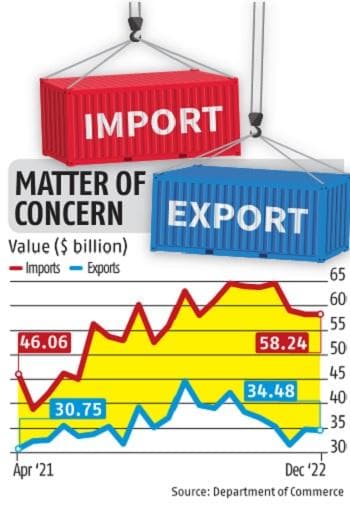 According to Barthwal, a jump in the export of electronic goods can be attributed to incentives being given to companies under the production-linked incentive (PLI) scheme. Rice exports, too, have risen, in a sign that India is trying to become a source of food security for other countries.

“Despite recessionary conditions, India has been able to maintain a good level of exports for textile products,” he said.

On a cumulative basis, exports witnessed 8.8 per cent growth during April-December and stood at $332.76 billion. “Given cumulative growth until December 2022 and indications of a slowdown in global economic activity, there is cautious optimism about international trade in the last quarter of the current financial year,” an official statement said.

Non-petroleum and non-gems and jewellery exports, also known as core exports, fell 8.5 per cent in December to $27 billion.

A Sakthivel, president of the Federation of Indian Export Organisations, said that the decline in merchandise exports is a reflection of the toughening global trade conditions on account of high inventories, economies entering a recession, high volatility in currencies, and geopolitical tensions. “The drop in commodity prices and restriction on some exports with a view to stemming the price increase in the domestic market have also affected the growth numbers,” Sakthivel said, adding that the coming months would be challenging unless both global economic growth and geopolitical situation improved drastically.