Union Minister for Ports, Shipping and Waterways Shri Sarbananda Sonowal has said building upon the success of the Sagarmala Programme, Ministry of Ports Shipping and Waterways has formulated a plan under the Sagarmala Programme for carrying out “Holistic Development of Coastal Districts”. Briefing the media after the  meeting of the National Sagarmala Apex Committee (NSAC) he said after multiple consultations with stakeholders, the Ministry has identified a total of 567 projects under convergence mode with an estimated cost of Rs. 58,700 Crore. He said while Sagarmala is Port-led and focusses on the logistic cost reduction and EXIM competitiveness, Holistic Development of Coastal Districts aims to bridge the gaps in infrastructure at the coastal areas and improve economic opportunity. The minister said with addition of projects identified in Holistic Development of Coastal Districts and new project proposals received under Sagarmala, total number of projects stands at 1537 worth Rs. 6.5 lakh crore. 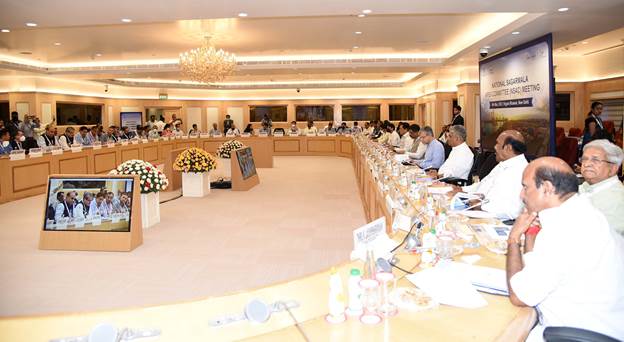 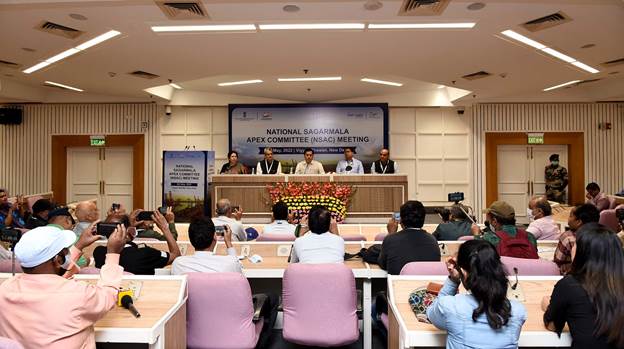 The Ministry has till date funded 140 projects to the tune of Rs. 8748 crore and is reviewing additional proposals sent by various state governments. More than 200 locations have been identified for development of floating jetties and 50 locations form part of the phase 1 implementation. It also was noted that there are 33 fishing harbour projects taken up of which part funding of 22 fishing harbour projects to the tune of Rs. 2400 crore has been sanctioned.

The successful completion of 7 years of National Flagship Sagarmala Programme has contributed significantly to the comprehensive development of country’s maritime trade and boost in economic growth. Under the program, MoPSW has implemented various large scale projects since inception. These projects range from port modernization, connectivity, industrialization, community development, coastal shipping and inland waterways development. As a result of such effort, the nation has achieved various milestones viz. increased efficiencies, capacity, employment generation, increased private participation, reduction of commuting time, reduction in logistics cost, increase in ease of doing business and placing India on the global map of leading maritime nations.

As port play vital role in the EXIM trade of the country, the focus of the government continues to be on the capacity augmentation of the ports so that they are able to meet ever increasing trade requirements of the country. The installed capacity of Indian ports during 2014-15 was 1531 MTPA, which has now increased to 2554.61 MTPA in 2020-21.

This has been possible on account of various infrastructure projects undertaken at various ports for construction of new berths and terminals, mechanization of existing berths and terminals, capital dredging for deepening of drafts for attracting large of vessels in port channels. Overall Average Turn Around Time reduced from 96 hours in 2014-15 to 52.80 hours in 2021-22 while Container Average Turn Around Time at Major Ports also reduced from 35.21 hours in 2014-15 to 27.22 hours in 2021-22.

Ministry is also developing two mega cruise terminal projects through Sagarmala Scheme at Mumbai and Mormugao Port. Upgrading and modernization of International Cruise Terminal at Mumbai worth Rs. 303 crore is under construction, project has registered progress more than 70%. Ministry is also supporting development of international and domestic cruise terminal and allied facilities at Mormugao Port.

Ministry is providing big push to RORO and Passenger transportation through waterways as it is environment friendly solution to mobility and resulting in significant savings of cost and time. ROPAX facilities are being developed by State or Central authorities and vessel deployment and services are carried out majorly by private players. It is observed that maintenance cost of the dredging is high compared to the revenue coming to authority. A detailed study is planned to be conducted for comprehensive assessment in all coastal states / UTs. Develop new business models for O&M on long-term contract while promoting use of electric ferries for Urban Water Transport. Separate scheme will be prepared in consultation with stakeholders for providing suitable financial assistance during operational phase

As per the studies conducted under the Sagarmala, there is an additional potential of coastal shipping upto ~340 MT by FY25, with an estimated annual cost savings of Rs. 9600 crore. Major commodities which can be transported through coastal shipping are Coal, Steel, Cement, Automobile, Foodgrain, Fertilizer, POL, etc. As a part of promotion of Coastal Shipping, it is proposed to create “Sagarmala Coastal Shipping Monitoring Committee” under Ministry of Ports, Shipping & Waterways, which will monitor the progress, provide funding support to infrastructure from Sagarmala scheme. To facilitate cargo movement and enabling infrastructure at ground level, dedicated Sagarmala Coastal Shipping Nodal Officer planned at each Major and Non-Major Ports.

Our inland waterways can become a viable medium for Intracity commute, short distance passenger transport needs. By means of ferries, Ro-pax vessels and high-speed launches, state governments and urban local bodies can offer seamless, integrated transport services to urban and suburban population and ease the stress and congestion of daily commute. The Kochi Metro Rail Ltd has procured 23 hybrid electric boats manufactured by Cochin Shipyard Limited. Each such vessel has the capacity to carry 100 passengers. IWAI has proposed similar services for 5 locations: Varanasi, Kolkata, Patna and Guwahati, Dibrugarh. The Ministry of Housing & Urban Affairs has recommended this model. State governments were requested to adopt the model for multi-modal green and cheaper mode of transport.

Inland Water Transport can also be an effective mode for enabling movement of bulk commodities in an eco-friendly and economical way. IWAI, has earlier this year, carried out a successful pilot run of 200 tonnes food grains between Patna and Guwahati and 2000 tonnes of steel between Haldia and Guwahati through the Ganga, Hooghly, Meghna, Brahmaputra rivers in India and Bangladesh. This movement, across international waters highlights the potential of the mode. This model can be replicated and upscaled for other bulk commodities including coal, LPG, fertilisers containers, integrating it with the coastal shipping. The North-Eastern States can benefit by reduced distance and congestion free transport.

The State ministers also explained their association with Sagarmala Projects and committed to conduct a detailed master plan of their Ports infrastructure and work out additional project proposals for Sagarmala funding.

The National Sagarmala Apex Committee (NSAC) is the apex body providing policy directions and guidance for port led development-Sagarmala projects and reviews its implementation. The NSAC was constituted on 13.05.2015 by the Union Cabinet and is chaired by Minister for Ports, Shipping & Waterways with Cabinet Ministers from stakeholder central Ministries and Chief Ministers & Administrators of Maritime States and Union territories respectively as members.