Did you know that India and Australia have entered into an Economic Cooperation and Trade Agreement? Yes, the #IndAusECTA was signed last year, on 2nd April, 2022; after Ratification and Exchange of Written Instruments, the Agreement has come into force on 29th December 2022.

A Win-Win for both India and Australia

It helps matters that Australia exports largely raw materials to India, while India exports finished goods. The ECTA builds on this complementarity, creating win-win opportunities for the two countries. Here is what Additional Secretary, Department of Commerce and Industry, Rajesh Agrawal says: “The Department of Commerce has achieved the unique distinction of operationalizing two Trade Agreements this year – India UAE FTA and Ind – Aus ECTA. The coming into force of Ind – Aus ECTA brings together two major economies of the world – India the 5th largest economy and Australia the 14th largest economy. Since the trade between the two countries is hugely complementary, this offers opportunities on both sides and will pave the way for a win-win solution for both India and Australia.”

So, what are these complementarities? Before we explore that, let us look at the current position of trade between the two countries, the before-position so to say, to understand how the picture will change in wake of the agreement.

India’s imports from Australia amount to 17 US $ billion while its exports to Australia amount to 10.5 US $ billion. However, what we need to realize that India’s imports from Australia are primarily (96%) raw materials & intermediate goods.  They are highly concentrated in Coal (74% of Australia’s exports to India) out of which 71.4% is coking coal. On the other hand, India’s exports to Australia are broad-based and dominated by finished products (consumer goods). India also spends $ 4 bn approx. each year on education of students in Australia.

The above composition of our bilateral trade is very well reflected in the statements made by the Union Commerce and Industry Minister Piyush Goyal, during the event held in Mumbai on December 29, 2022, the day the agreement came into force.

“There is a lot of potential for exporting finished goods to Australia, since they hardly manufacture anything, they are largely a raw material and intermediate producing country, we will get cheaper raw materials which will not only make us more competitive globally but also enable us to serve Indian consumers better; enabling us to provide more quality goods at more affordable prices.”

“Australia, which is largely dependent on imports, will benefit hugely, they will soon start seeing a lot more finished goods coming in from India, providing huge amount of work and job opportunities in both goods and services, provided by Indian talent.”

So, let us see how the Agreement will benefit India and Australia and hence the world as well.

Benefits under Trade in Goods

The Agreement will benefit various labor-intensive Indian sectors that are currently subjected to 5% import duty by Australia.  The agreement will result in immediate market access at zero duty to 98.3% of tariff lines accounting for 96.4% of India’s exports to Australia in value terms. The remaining 1.7% lines are to be made zero duty lines over 5 years. Overall, Australia is offering duty elimination on 100% of its tariff lines.

Immediate duty-free access covers all labour-intensive sectors such as Textiles and Apparel, Agricultural and Fish products, Leather, Footwear, Furniture, many Engineering Products, Jewelry and select Pharmaceuticals. As a result, many industries such as steel, aluminium, garments and others will get cheaper raw materials which will enable them to become competitive. Both sides have also agreed to a separate Annex on Pharmaceutical products under this agreement, which will enable fast-track approval for patented, generic and biosimilar medicines.

India is offering zero duty access to 90% value of products from Australia (including coal). Zero duty on 85.3 % value of products will be offered immediately while zero duty on 3.67 % value of products will be offered progressively over 3, 5, 7 and 10 years. India has offered concessions on Tariff lines of export interest to Australia like Coking coal and Thermal coal, Wines, Agricultural products – 7 of them with TRQ (Cotton, Almonds shelled and in shell, Mandarin, Oranges, Lentils, Pear), Metals (Aluminium, Copper, Nickel, Iron & Steel) and Minerals (Manganese Ore, Calcined Alumina). Many sensitive products such as milk and other dairy products, wheat, sugar, iron ore, apple, walnuts and others, have been kept in India’s Exclusion list.

Immediate Duty-Free Access is projected to potentially create 10 lakh jobs in India and additional exports of $ 10 bn from India to Australia in the next five years.

Benefits under Trade in Services

The commitments made by Australia under Trade in Services are the best it has made in trade agreements till now and match its recent FTA with the UK. Australia has committed its schedule in the negative list and has also made wide-ranging commitments in around 135 sub sectors with Most Favoured Nation (MFN) status in around 120 sub-sectors.  The Agreement provides for an Annual Quota of 1,800 for Yoga teachers and Indian Chefs. Post study work visa (18 months – 4 years) will be made available for Indian students. This will benefit more than 1,00,000 Indian students in Australia. Along with this, the #IndAusECTA makes an arrangement for Work and Holiday Visa for young professionals.

Australian services to get Negative List Treatment after 5 Years

India has for the first time agreed to Negative listing after 5 years of coming into force of the Agreement. (But what is negative listing? Under the negative listing approach, a country treats imported and locally produced goods / services equally in all areas, and areas where this is not done are listed – in the negative list – as exceptions. So, in this case, India would provide this treatment to services exports from Australia, after a period of 5 years.)

India is also making a commitment to Australia in around 103 Service Sub-Sectors with Most Favoured Nation status in around 31 Service Sub-sectors for the first time. Australia gets commitments in banking, insurance, other financial services, business services.  The Agreement opens avenues for investment in computer related services, telecom, construction, health & environmental services. All these are similar to past FTAs signed by India.

Commitments have also been made to pursue Mutual Recognition Agreements (MRAs) in professional services in 12 Months.

The #IndAusECTA also has certain ‘protective features’ aimed at guarding both countries against unintended consequences on trade; let us examine what they are.

The Agreement has removed the discrepancies with regard to use of Double Taxation Avoidance Agreement for taxation of Indian firm royalties, fees and charges.

Australia has no domestic provision for charging tax on royalties, fees and charges by firms sending these to parent companies. A provision in the Double Taxation Avoidance Agreement (DTAA) was used to tax this remittance. However, as an outcome of Ind – Aus ECTA, Australia has made changes in its tax laws, removing this discrepancy. This will eliminate Double taxation from 1st April 2023. As a result, the IT sector can earn higher profits and become competitive.

This is what the Union Minister for Commerce and Industry Piyush Goyal has had to say on this: “The Agreement will also eliminate Double taxation on IT services which were making us less competitive and making us less profitable in IT sector, the double taxation has now been removed by amending the law, from 1st April, double taxation for IT sector will be over, we will save millions and millions of dollars right now, and over a billion dollars going forward, maybe 5 – 7 years going forward, giving us competitive edge and also creating a lot many jobs.”

An Agreement Suiting the Specific Requirements of Indian Economy

Great care has been taken in negotiating the agreement to suit the peculiarities of the Indian economy. Here are some of its beneficial features:

As a result of the aforementioned provisions, projections point to a number of long-term gains for the Indian economy.

The coming into force of the India Australia ECTA is expected to consolidate and help in the growth of market share of Indian products and services. New markets for Indian goods in Australia are also likely to emerge. There is an expected growth in pharmaceutical products with the easing of Australian regulatory processes. There is expected to be a vertical movement in value chains with the increasing presence of higher value products of advanced technology. Exports are expected to increase by 10 billion by 2026-27 with a creation of approximately 10 lakh jobs. The total bilateral trade is expected to cross US $ 45-50 billion by 2035. It is expected that there will be enhanced job opportunities for Indians in Australia and increased remittance and investment flows to India from Australia.

Governments of both India and Australia have worked together to achieve this milestone and are optimistic about its consequences not only for the trade between the two countries but also for further strengthening the bilateral relations.

Australian Prime Minister, Anthony Albanese notes that the agreement will deliver new opportunities to Australian businesses. He says that, accepting the invitation of the Prime Minister of India, he is going to visit India in March with a business delegation committed to improve the trade between the two countries.

Responding to his Australian counterpart, Prime Minister Narendra Modi observes that the coming into force of the ECTA is a watershed moment, which will unlock the enormous potential of our trade and economic ties and boost businesses on both sides.

Addressing the media briefing to mark the coming into force of the #IndAusECTA, Union Minister for Commerce and Industry Piyush Goyal said that the ECTA has been negotiated with the speed of Brett Lee and the perfection of Sachin Tendulkar and is a labour of love between the two countries. The Minister further assured that the Indian government will continue to negotiate for a bright future for the people of the country, for innovation, education, health and technology. 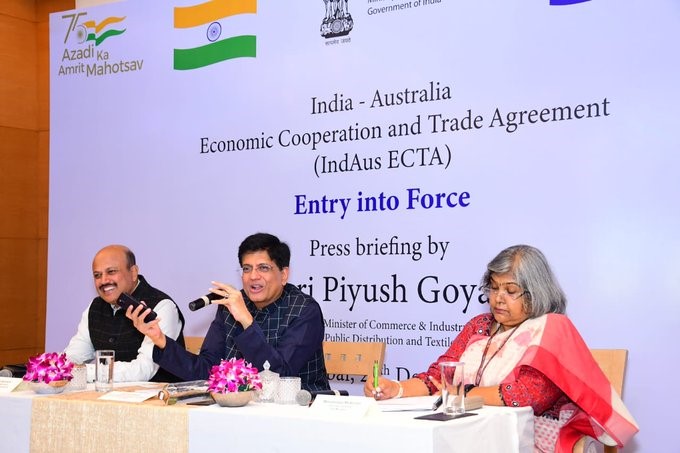 All the necessary notifications required for entry into force of Ind-Aus ECTA on 29.12.2022 have been issued by Department of Revenue and the Directorate General of Foreign Trade in the Department of Commerce.

More information on procedural issues and queries regarding the India Australia ECTA can be found below:

And what about the agreement itself? Check it out here: https://commerce.gov.in/international-trade/trade-agreements/ind-aus-ecta/

Further information on the #IndAusECTA:

What are your thoughts on the ECTA? Share them on social media using the hashtag #IndAusECTA.