India’s first domestically built aircraft carrier, the Vikrant, departed for its second round of sea trails as the vessel prepares for delivery. More than 20 years since planning first began, and beset by numerous construction delays, the aircraft carrier is now expected to be commissioned in 2022, possibly coordinated with the government’s plans to celebrate India’s 75 years of independence in 2022.

Planning for the Vikrant reportedly started in 1999 with construction beginning a decade later. Built at the Cochin Shipyard, the vessel is also known as Indigenous Aircraft Carrier 1 becoming an object of pride for the nation which currently only has one aircraft carrier, a Russian-built vessel. The government is celebrating that nearly three-quarters of the Vikrant and her equipment was built in India.

The Vikrant is approximately 860 feet long with a beam of over 200 feet and a height of 193 feet to the top of the conning tower. She will carry a complement of nearly 1,700 including 196 officers.

India chose to build a mid-sized carrier which when completed will be approximately 45,000 tons full load. She is outfitted with a high degree of automation for navigation as well as operations and will be able to accommodate both fixed-wing and rotary aircraft. Her initial air wing will include MIG fighter jets, helicopters, and early warning system helicopters.

The Vikrant features a STIBAR design with a ski jump at the front of the flight deck for launching aircraft under their own power. It uses a STOBAR design, short take-off, barrier arrested recovery, system.

Power for the aircraft carrier is from four General Electric gas turbines and two Elecon COGAG, combined gas turbine gearbox driving two shafts. The vessel is designed to operate at top speeds of between 28 and 30 knots with a maximum range of 7,500 to 8,000 nautical miles at a speed of 18 knots.

The Vikrant undertook its first sea trials in August 2021, pronounced a success by the Indian Navy. The Vessel departed on October 24 for its second round of trials. 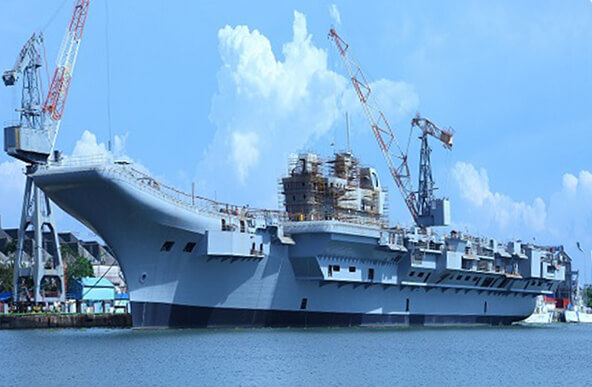 2022 to be bigger & better for container carriers as volatility continues