* Note: The latest data for services sector released by RBI is for November 2022. The data for December 2022 is an estimation, which will be revised based on RBI’s subsequent release. (ii) Data for April-December2021 and April-September 2022 has been revised on pro-rata basis using quarterly balance of payments data. 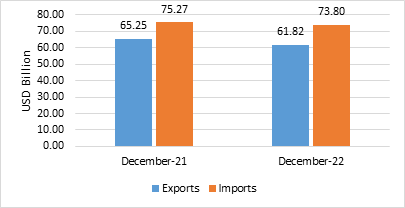 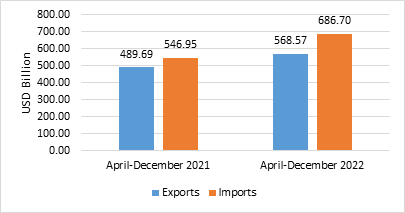 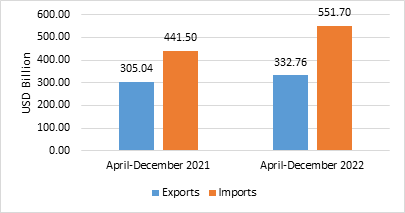 The resilient growth of the Indian economy during the first half of the current financial year, the fastest among major economies, bespeaks strengthening macroeconomic stability. However, global growth forecasts indicate downturn in global economic activity and trade. As per Global Composite PMI report (January 2023), new export orders have been contracting for the tenth successive month in December. The report also indicated that India and Ireland were the only nations to register growth of economic activity in December 2022.

In the Textile sector, Cotton yarns exports declined because there was continuous price rise of raw materials throughout 2022. Exports of Indian Textile apparels and RMG textiles got a major hit due to recessionary trend in major economies.

Given the cumulative growth until December 2022 and the indicators of the slowdown in global economic activity, there is cautious optimism on international trade in the last quarter of the current financial year.