The logistics’ eastward pivot and the sanctions have led to an acute need of the domestic fleet expansion. Containerships are needed to unload the Far East routes and to organize a container line in the Arctic.
With the drastic shift of foreign trade towards eastern countries and the challenges brought by the sanctions and withdrawal of some western operators from Russia, the issue of creating our own transport fleet has become acute. Th most crucial shortage is seen in the segment of bulkers (read more in IAA PortNews article >>>>) and container ships. According to the Russian Ministry of Transport, container ships of up to 3,000 TEU are most needed in the container segment.

“The demand is estimated at hundreds of units. As of today, the work is underway on expansion of our shipyards capacity and consideration of ready ships acquisition abroad by Russian beneficiaries,” Aleksandr Poshivai, Deputy Minister of Transport, said earlier.

Zakhary Dzhioev, head of the Federal Marine and River Transport Agency (Rosmorrechflot) later said 30 to 35 container ships with a capacity of 2 500-3 000 TEUs are needed.
Container ships are needed in view of opening new Asian routes, including the development of the North-South international transport corridor. Besides, containerships are required for unloading of the Far East routes, which implies the organization of container lines from China to Russian ports in the Southern and Baltic basins. According to the market participants, it is necessary to build container ships of 3,000 TEU in capacity.

There are two alternatives – either to build ships ourselves or to get them in the world market. The business is currently using the second way but the cost of container ships has increased considerably over the past year: according to data previously announced by Andrey Severilov, Chairman of the Board of Directors of PAO Far Eastern Shipping Company (FESCO), the cost of container ships in 2022 increased 6-7 times.

As for the construction of container ships in Russia, this task can be solved both by the shipyards of United Shipbuilding Corporation (USC) when it comes to building small ships, and by a new shipyard on island Kotlin in St. Petersburg (Rosatom). In the end of last year, the Southern Center for Shipbuilding and Ship Repair (part of USC) signed a contract for construction and delivery of four multipurpose dry bulk / container carriers of Project 00108. Those ships of mixed river/sea class will have a capacity of up to 531 TEU. 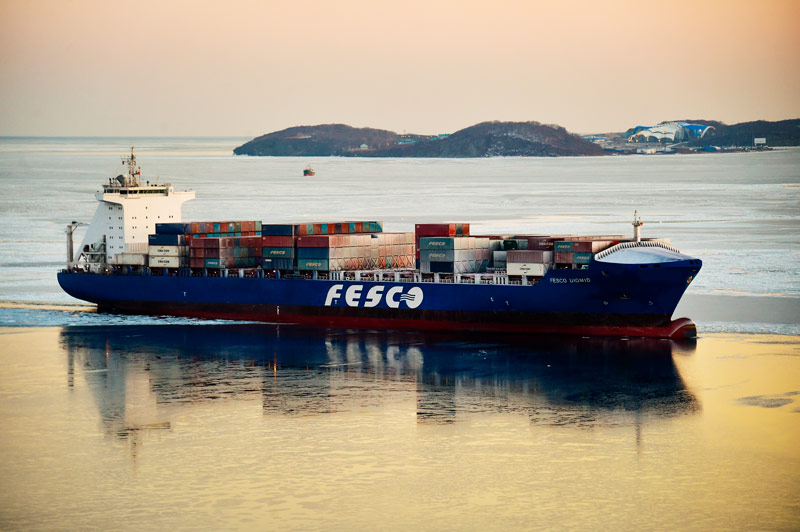 FESCO is looking into building 16 universal dry cargo container ships designed by Vympel at Kotlin shipyard. The shipyard will be ale to build ships of large capacity.
USC also says Severnaya Verf shipyard will also be able to build larger ships upon completion of its modernization. However, there is no information on possible construction of container ships there (according to earlier reports, the plans were associated with the construction of a cruise ship).
Rusatom Cargo earlier announced its plans to organize a container line on the Northern Sea Route. Under that project, CNIIPF recommended as a priority option a concept of the Arc8 class 6000teu Arctic container ship that would be outfitted with rudder propellers and powered by LNG. According to the data obtained by IAA PortNews, the project of a trans-Arctic container line is still under development.
Deadlines of all these projects goes beyond 2024 and their implementation will imply the trite issue of ship components. Therefore, in the coming years, the need for container ships, will most likely be still satisfied in the global secondary market or through placing orders at the shipyards of friendly countries. For example, FESCO’s investment program for 2023 foresees the purchase of container ships of 6,000-7,000 TEU in capacity. The company notes that the current situation in the global market of sea-borne container transportation is favorable for the purchase of vessels. Indeed, the demand for sea container transportation has decreased and, consequently, foreign companies can start getting rid of excess tonnage.

In this regard, market participants propose to adopt a programme of preferential loans in the part of acquiring or building ships abroad while Russian shipbuilders are not able to meet the demand for such ships in full. However domestic production has to be set up anyway: the market situation may change again, and we cannot count on the lifting of sanctions so far.