MSCI — a leading provider of research-based indexes and analytics, disclosed that it will knock off APSEZ from its four climate indices.

The controversial Carmichael thermal coal project in Australia continues to haunt the Adani Group, with the MSCI—a leading provider of research-based indexes and analytics—disclosing that it will knock off Adani Ports and Special Economic Zone (APSEZ) from its four climate indices, after its links to the project was deemed “severe”. Besides Adani, the index provider will also be dropping REC and IPCA Laboratories even as six new companies make it to the index (See: When green is the new red).

Lara Hudson, a spokesperson for MSCI, has confirmed to Fortune India that Adani Ports, which has a market cap of close to $20 billion (around ₹1.47 lakh crore) would be removed from the MSCI ACWI IMI Climate Change Indexes following a semi-annual index review by the end of this month. 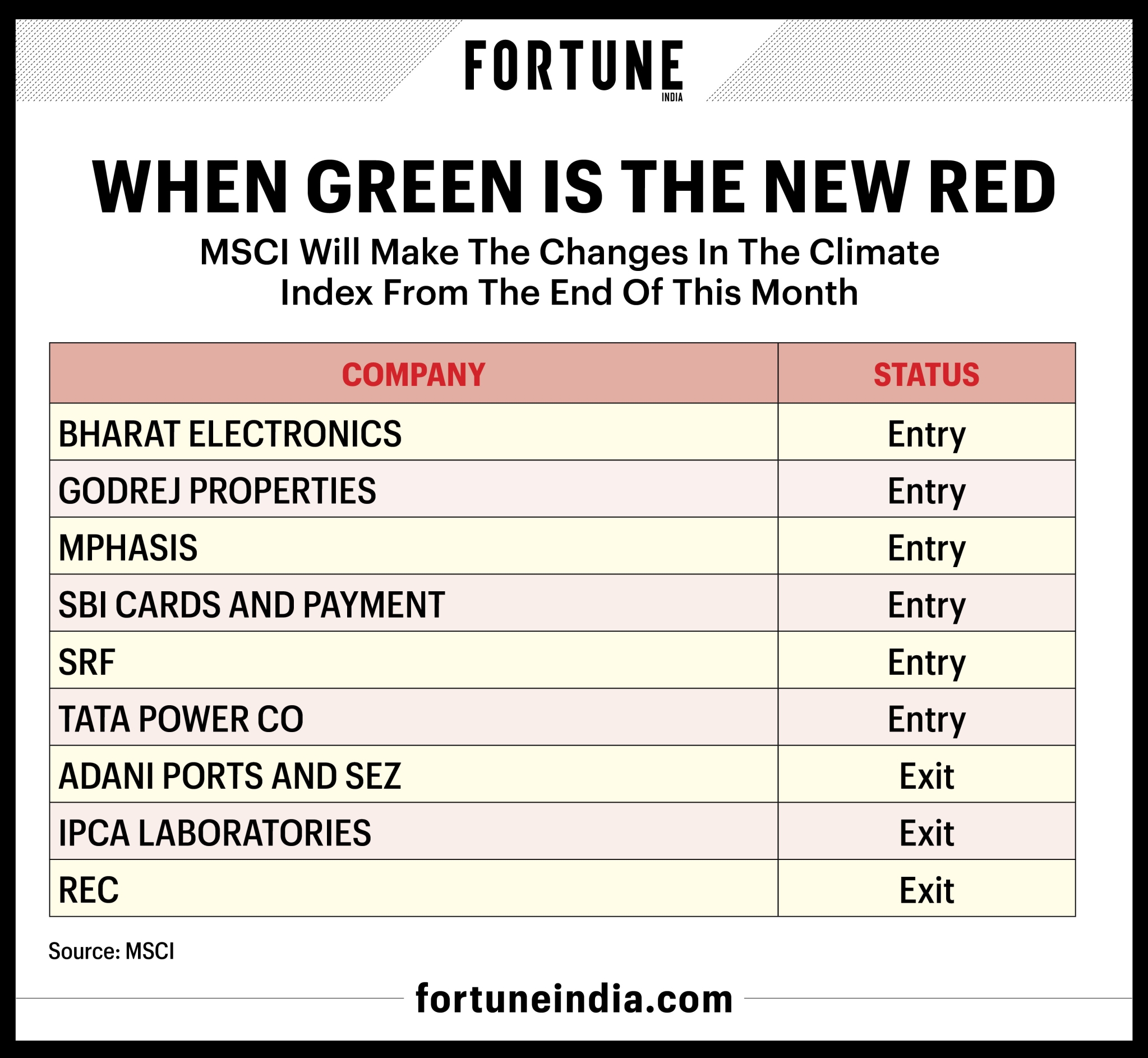 The four indices are EM (Emerging Markets) Climate Change, Asia Pacific Climate Change, ACWI Climate Change, and ACWI IMI Climate Change. The ACWI IMI index includes large and mid-cap securities across 23 developed markets and 27 emerging market countries. The index aims to represent the performance of an investment strategy that reweights securities, based upon the opportunities and risks associated with the transition to a lower-carbon economy. According to estimates, ESG-committed managers raised $403 billion in the first nine months of 2021 compared with $506 billion raised in all of 2020.

On the reason for the exclusion, Hudson said in an email response, “In September 2021, MSCI revised the ESG Controversy Assessment for Adani Ports and, as a result, the company does not meet the eligibility criteria for the index. Adani Ports will be removed from these indexes effective December 1, 2021.”

Though the MSCI did not elaborate to Fortune India on what the assessment was, it has informed Market Forces—the Melbourne-based climate activist group—that the setting up of Bowen Rail Company (BRC), the haulage company for the Carmichael coal mine, had resulted in the project being added as a controversy with which Adani Ports is associated with. As a result, the MSCI will be removing the ports player since the criteria exclude companies with “severe” or “very severe” controversy scores.

In an email to Market Forces, MSCI, in September, stated that “regarding Adani Port’s ESG Controversies assessment, we have updated the controversy cases related to the Carmichael mine. These now take into account the close link between Adani Enterprises and Adani Ports due to the Bowen Rail Company. This has resulted in Adani Ports now having two ‘severe’ controversy cases related to the environmental and local indigenous communities’ impacts due to the Carmichael Mine, downgrading its overall Controversy assessment to an Orange Flag and a score of 1.”

While the Carmichael project is owned by Adani Enterprises (AEL), in August 2020, Adani Ports set up BRC as a wholly-owned subsidiary for haulage operations from the mine to North Queensland Export Terminal (NQXT). However, in March 2021, to meet its carbon neutral commitment, Adani Ports transferred the ownership of BRC to Adani Global Pte—a subsidiary of AEL. However, MSCI, through its action, continues to link Adani Ports to the Carmichael project.

Interestingly, Adani Ports will remain included in the MSCI ACWI Low Carbon Target Index as part of the semi-annual index review. On the difference in approach, Hudson told Fortune India that, “the MSCI Global Low Carbon Target Indexes are focused on tilting towards companies with lower carbon intensities and fossil fuel reserves. It tilts away from those with higher carbon intensities and exposure to fossil fuel reserves, rather than excluding companies.”

Pablo Brait, a campaigner with Market Forces, however, believes that by being the owner of Carmichael’s key transport infrastructure, Adani Ports would be instrumental in the exploitation of Galilee Basin—an immense subterranean body of coal. “The Adani Group exploits its complex structure to enable some parts to, for example, join the Science-based Targets Initiative and set carbon neutrality goals, while other parts build new coal power stations and coal mines. The BRC is a clear case in point. Adani Ports set it up and then admitted that to ‘fulfil its carbon-neutral commitments’ it transferred ownership to Adani Enterprises. MSCI’s linking of Adani Ports to Carmichael has helped expose this farce.”

There is a growing clamour worldwide that global coal production must decline 11% by 2030 to limit global warming to 1.5°C. However, this is not the first time that Adani Ports has been removed from an ESG index. In April 2021, S&P had dropped the company from the Dow Jones Sustainability Index, owing to its business links with the Myanmar Military. State Street, which provides investment management and related services to institutional investors, has also excluded Adani Ports and Adani Enterprises from some MSCI ESG indices that it follows. Earlier this month, the Bank of New York Mellon, too, snapped ties with Adani in Australia over the project.

Even as a lot of investment banks have backed out from the Australian project, the group has managed to self-finance the project by scaling down the size of its operations. The mine—which is expected to produce 10 million tonnes of coal a year—is targeting the first shipment by this year-end, nearly eight years behind schedule. Despite the controversy, NQXT has contracted customers such as Byerwen, BHP Mitsui and Anglo American for the coal output.

AEL is implementing the mining project in phases. According to Brickwork Ratings, the estimated project cost is $1.47 billion, of which, AEL has invested $1.30 billion out of its funds, as on June 30, 2021. The balance is planned to be invested through a combination of debt and equity, subject to financial closure which is yet to be achieved. For the rail haulage project, AEL has a JV, wherein AEL and JV partners hold 50% equity each. The cost of the rail project is expected to be $1.4 billion, of which $1.2 billion has been completed by the way of the partner’s contribution to date. The debt requirement for both the projects will be made through a two-tier standby letter of credit structure which will be raised in two tranches. Interestingly, SBI chairman Dinesh Khara had earlier told Fortune India that the bank has not yet agreed to be part of the project.

Though there has been a growing clamour among climate-conscious investors, the overseas debt market has not exactly run dry for the group. In FY21, Adani Ports raised $1.55 billion in three tranches of $750 million, $300 million and $500 million at a fixed coupon rate ranging between 3% and 4.20% in the 7 to 10-year maturity bucket. The port major’s foreign currency bonds issuances are senior unsecured in nature, and constitute 69% of its consolidated net debt of ₹29,937.85 crore in FY21, incurring a finance cost of ₹2,129 crore. While the company has stretched its average debt tenure to six years from 5.2 years in FY20, its average debt cost is 6.7%. Though its net debt/EBITDA is now at a four year high of 3.3x, the overall debt/equity ratio is still low around 1.06x.