Blank sailings are failing to shore up the deteriorating situation for carriers on most of the main container tradelanes. The peak season has been curtailed.

The average capacity offered from the Asia to the US West Coast has fallen to its lowest since February in the past four weeks, new data from online rate platform Xeneta shows. Over this period, an average of 275,000 teu has left Asia heading for the US west coast, about 50,000 teu less than the peak in early August.

What has happened to peak season? It just doesn’t seem to have materialised

Compared to the same four weeks in 2021, the capacity offered is down by 13%, the equivalent of removing 21 ships of 8,000 teu, which is the average size of ships on this trade.

Carriers are fighting to shore up falling spot rates from Asia to US West Coast, blanking some 1.5m teu of capacity over the last 12 weeks. However, rates have collapsed by 46.3% over the same period, Xeneta data shows, averaging $4,150 per feu as of Tuesday. 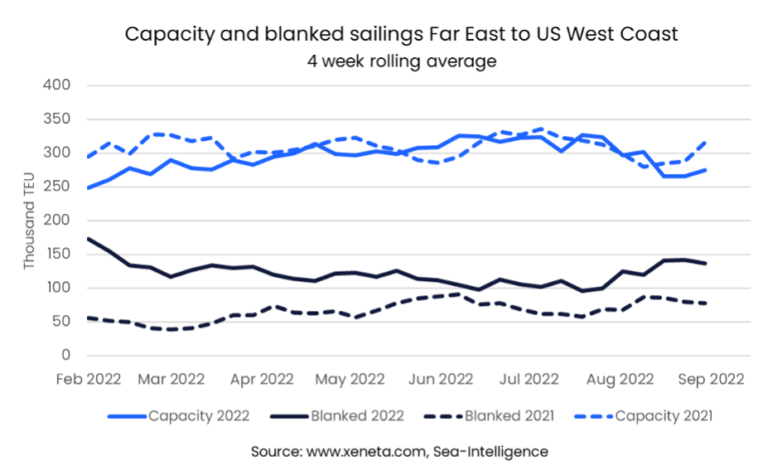 “This is the highest number of blanked sailings on this key trade since January and February, at a time when the industry would normally have anticipated very strong demand,” commented Peter Sand, Xeneta’s chief analyst, adding: “It’s an aggressive strategic play by carriers, but it’s clearly not paying dividends.”

Sand went on to point out the historical highs in capacity, demand and rates that the headline figures are falling from on the transpacific.

“To get things into perspective,” he commented, “compared to the same period in 2019, capacity on this trade is up by 240,000 teu, whereas demand is up by 890,000 teu. So, relatively speaking, the trend is worrying for carriers, but the figures remain strong. That said, what has happened to peak season? It just doesn’t seem to have materialised, does it?”

“Falling demand for ocean freight, whatever the drivers – inflation, fears of a looming recession, an extremely early peak season – is making capacity more readily available than it has been,” commented Judah Levine, head of research at Freightos.

The Golden Week holiday in China that begins in a week will pause a lot of manufacturing, and the lead up typically causes some increase in ocean demand. But Golden Week’s approach and carriers starting to cancel sailings to try and keep vessels full have not stopped the rate slide.

“With this year’s ocean peak season now clearly behind us, the coming weeks could indicate what the new floor for spot rates will be this year, and how much above 2019 levels capacity management, congestion, and volumes can keep container prices,” Levine from Freightos said, adding that he expects the bottom to still stay above pre-pandemic 2019 levels, a point of view shared with many other analysts including HSBC.

Looking over the past six weeks, analysts at Vespucci Maritime noted the Asia to US west coast spot rates have dropped 45% making it the largest six-week drop since the beginning of the WCI data in 2012, surpassing the 44% six-week drop in March 2016 at the end of the severe price war of 2015-2016, with Vespucci’s founder Lars Jensen warning prices have yet to bottom out.

The current SCFI index is 182% higher than the level seen in the same week in September 2019.

“In other words, the SCFI index one week prior to Golden Week is still almost 3 times higher than it was at the same time in 2019,” Jensen wrote in an update on LinkedIn today.

Despite the declines seen across multiple container indices in recent months, most analysts are forecasting liner shipping will rake in record profits for the full year thanks to earlier secured long-term rates.

Liner veteran John McCown, who heads up Blue Alpha Capital, predicted earlier this month that liner shipping will make a cumulative net profit of $244.9bn for the full year of 2022, a remarkable 65.2% improvement over 2021’s record results. 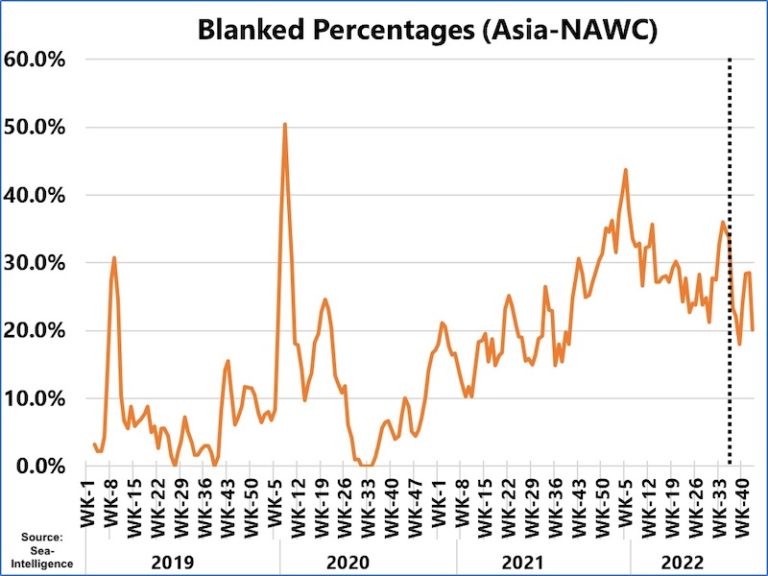