The ICC International Maritime Bureau (IMB) has reported the lowest number of reported piracy and armed robbery incidents for the first nine months of any year since 1994.

Reported incidents are down to their lowest level in decades, but violence against seafarers has continued with 51 crew kidnapped, eight taken hostage, five threatened, three injured, two assaulted and one killed, according to the latest IMB statistics.

While the reduction of reported incidents is a welcome, IMB PRC warns that seafarers must remain vigilant as violence against crew remains high in many areas of the world.

Decrease in Gulf of Guinea 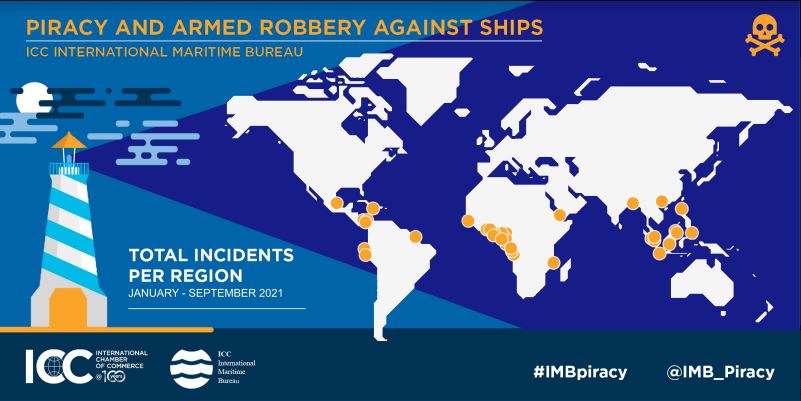 The overall reduction of piracy and armed robbery incidents in the region is a testament to enhanced maritime security and response coordination measures adopted by regional and national authorities, according to IMB. Despite these gains, IMB warns that the risk to crew remains high in the region and that such efforts must therefore be sustained.

“We welcome the decrease of piracy and armed robbery attacks in the Gulf of Guinea and the efforts taken by maritime authorities in the region,” said Michael Howlett, Director, ICC International Maritime Bureau. “However, there needs to be sustained efforts to ensure the continued safety of seafarers as they transport essential goods throughout the region. Coastal States must redouble their coordination and security measures to ensure that piracy and armed robbery incidents continue to decline.”

The Singapore Straits reported 20 incidents of armed robbery – the highest number recorded since 1991. Reported incidents in the Singapore Straits are up from 15 in 2020 and just one incident in 2019. These attacks are low-level and opportunistic in nature, but IMB warns that the perpetrators pose a direct threat to seafarers and vessels underway. In four incidents, crew were either threatened, assaulted, or injured.

Concern off the coast of Peru

The Callao Anchorage in Peru is another area that has witnessed an increase of piracy activity with 15 reported incidents in 2021 – the highest number since 1991. As with the Singapore Straits, these incidents are low-level thefts with knives being reported in 60% of the incidents. Attackers in the region possess the capacity to carry out violent attacks with three crew taken hostage and a further one each assaulted or threatened during the first nine months of 2021 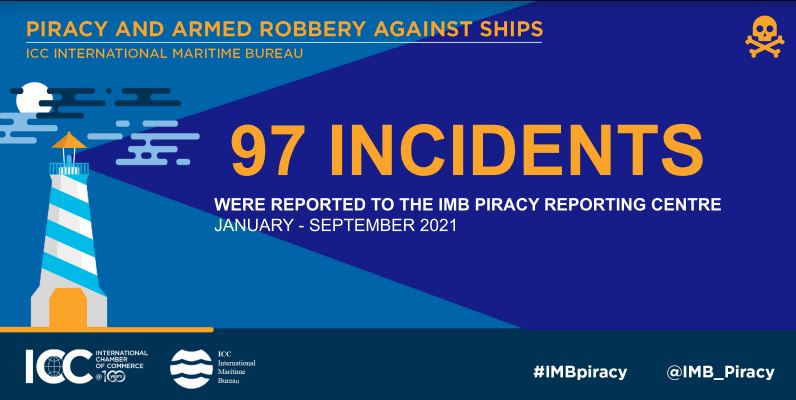 Since its founding in 1991, IMB PRC remains a single point of contact to report all crimes of maritime piracy and armed robbery, 24 hours a day. Their prompt forwarding of reports, and liaison with response agencies, broadcasts to shipping via GMDSS Safety Net Services, and email alerts to CSOs, all provided free of cost, help the response against piracy and armed robbery and the security of seafarers, globally.Source: Shipping Tribune

Carriers cancel sailings as vessels are stuck at congested ports