Handicraft exports can take a quantum jump over the Rs 33,253 crore achieved in 2021-22: Shri GoyalTrade agreements with UAE and Australia are big opportunities for artisans: Shri GoyalPrime Minister, Shri Narendra Modi is the brand ambassador of India’s handloom sector as he is seen wearing some of the artistically woven clothes: Shri GoyalArtisans may be linked with Government e-Marketplace for promotion of their products: Shri Goyal

The handicrafts sectors needs a fresh, ambitious vision that takes it new heights with ambitious targets, and the country should not be satisfied with the 29% increase in exports achieved in 2021-22, said Shri Piyush Goyal, Union Minister of Textiles, Commerce & Industry and Consumer Affairs, Food and Public Distribution while delivering the address at the 23rd Handicrafts Export Awards Function here today.

Shri Goyal said the increase in exports of handicrafts from 25,680 crore in 2020-21 to Rs. 33,253 crore in 2021-22 shouldn’t be the benchmark as the sector has tremendous capacity to strengthen its export targets further. He called upon the award winners to stress on quality, consistency, design and branding to create an ecosystem where multifold increase in the sector could be made possible.  Citing a number of examples including that of solar charkha, the textile minister urged the exporters to focus on innovation to drive the growth in the sector.

He cited the rapid rise of Tiruppur, which had grown dramatically in recent decades and said exports of handicrafts could take a quantum leap.

He emphasized that Prime Minister, Shri Narendra Modi is the brand ambassador of India’s handloom sector as he is seen wearing some of the artistically woven clothes. He said that during PM’s visit to other nations, mostly Indian handicraft products are gifted. Similar practice is being followed by nearly 200 Indian Missions abroad. 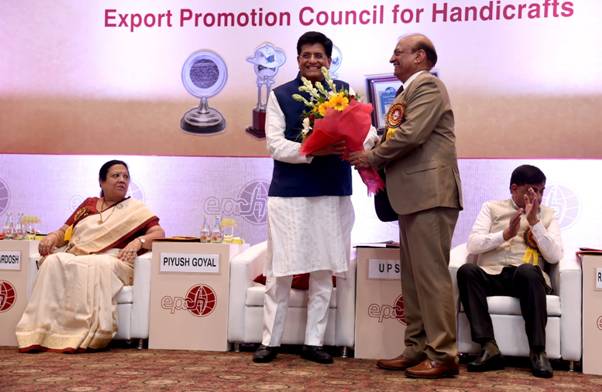 Shri Goyal said that the Ministry of Textiles has a database of 30 lakh artisans and if we could focus on increasing the income of the artisan by even Rs. 1000 per month, it could lead to transformation in their lives. He suggested that artisans can be linked with GeM. Also, the mandatory clause of GST registration could be worked upon so as to bring the artisans on board on e-commerce platforms. Emphasizing the big opportunity created by Free Trade Agreements with UAE and Australia, the textile minister suggested that the artisans could be provided a platform in the Dubai Expo Centre for showcasing their products and organizing buyer-seller meets. He also complimented EPCH work for past three and a half decades to promote & boost exports. 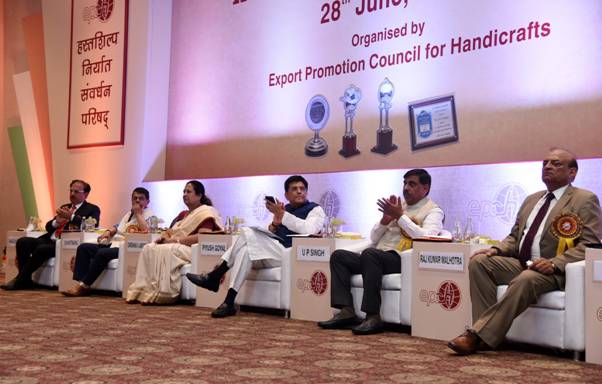 Smt. DarshanaVikramJardosh, Hon’ble Union Minister of State for Textiles and Railways said that it’s significant to promote and support the artisans. She applauded that EPCH through its exhibitions ensures promotion of small artisans. Shri Upendra Prasad Singh, IAS, Secretary, Ministry of Textiles, Govt. of India, congratulated the winners. He said even during COVID pandemic, Handicrafts export continued to grow. He also emphasisied that nearly 70 lakh people in the country are directly or indirectly connected with Handicrafts.

Shri Raj Kumar Malhotra, Chairman, EPCH informed that a total of 126 awards were given to 61 winners of the year 2017-18 and to 65 winners of the year 2018-19. A special commendation award was also given. The Awards, instituted in 1989, are organised in four broad categories – Top Export Award, Product Group-wise Awards, Regional Awards and Woman Entrepreneur Award together totalling to 39 Trophies, 3 Platinum Performer Certificates, 72 Merit Certificates, 11 Women Entrepreneur Awards and 1 Special Commendation Award.  The objective of awards is to create a sense of healthy and wholesome competition amongst exporters. Over the years, these have become a coveted recognition amongst the handicrafts exporters as more and more strive to achieve a place in these awards. 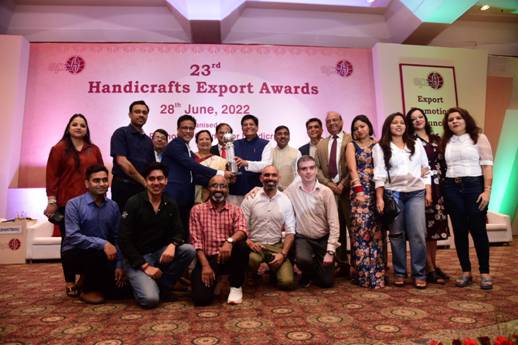 Shri Rakesh Kumar, Director General, EPCH thanked the dignitaries for their presence, encouragement & support and added that due to the pandemic, the export awards function is being held after a gap of three years, hence, honoured awardees are for two consecutive years.

EPCH is a nodal agency for promoting exports of handicrafts from the country to various destinations of the world and projecting India’s image abroad as a reliable supplier of high-quality handicrafts goods & services. The Handicrafts exports during the year 2021-22 was Rs. 33253.00 Crores (US $ 4459.76 Million) registering a growth of 29.49% in rupee term & 28.90% in dollar terms over previous year informed by Shri Rakesh Kumar, Director General, EPCH.

The Export Promotion Council for Handicrafts (EPCH) has been organizing Export Awards since 1989 to felicitate exporters who have contributed significantly to the development as well as to the exports of handicrafts from the country. The institution of these awards is said to be one of the vital steps taken by EPCH.

The export awards are given based on the export performance of the exporters duly certified by the Chartered Accountant and are selected by Export Awards Selection Committee chaired by the Development Commissioner (Handicrafts) or his nominee (Addl. Development Commissioner-Handicrafts) and members of the Committee of Administration of the Council.

Five types of awards are given to the exporters of handicrafts based on their export performance viz. Top Export Award (All Handicrafts); Top Export Award (Product Categories), Women Entrepreneur Award, Merit Certificates for Excellent Export Growth and Regional Export Award.

Import and domestic production of APIs