The Chintan Baithak was co-chaired by Shri Shripad Yesso Naik and Shri Shantanu Thakur, Ministers of State for Ports, Shipping and Waterways and attended by Chairpersons of all major ports, and Senior Officials of MoPSW, for brainstorming on promoting India’s marine economy.

Speaking at the occasion Shri Sonowal reiterated Prime Minister Narendra Modi’s vision to develop and promote India’s blue economy. He further suggested that all ports should prepare master plan in order to become Mega Ports by 2047. 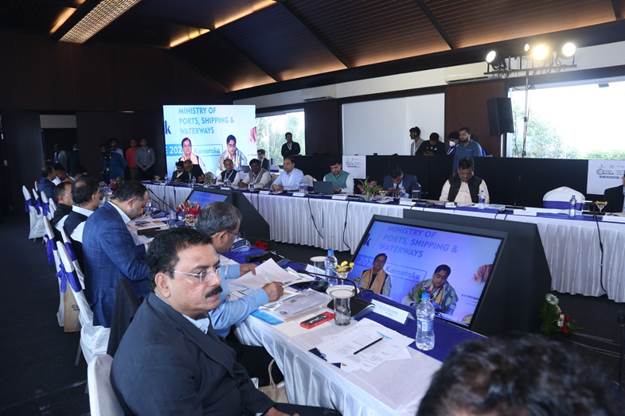 Entire three day Baithak was divided into various sessions with exclusive themes focusing on various aspects and prospects of the shipping industry along with role to be played by the MoPSW towards nations development. The session on ‘Implementation of New Tariff Guidelines for existing projects and Ongoing Projects’ pondered on the issue of tariff fixation of existing BOT operators. While, the session on ‘Ensuring level playing field amongst New and Existing Concessionaires in Context of New MCA’ discussed the challenges brought by New MCA 2021 bringing in tariff dynamism based on market rates thereby resulting in non-level playing field for old players.

The session on ‘Integration of IWT, Coastal and Exim Transport’ charted out the potential benefits of improving Port Cargo via Coastal and Inland Waterways Transport in terms of cost savings and emission reduction. Through concerted effort by Central and state govt, Coastal and IWT can become complementing modes with Rail and Road Transport.

The Chintan Baithak also focused on ‘New Generation Automated Technologies’ wherein application of various cutting-edge technologies such as drone surveillance, Internet of things, Artificial Intelligence, etc, can significantly improve operations at Indian Ports. A presentation on Steps to be taken to compete with private/non-major ports talked about increasing competitiveness in the port sector and the positioning of major ports versus the non-major ports in India.

Shri Sonowal suggested the major ports to draft land policy guidelines, explore potential of satellite presence out of port limits. In order to make SPVs more efficient and effective, the Minister directed the officials to repurpose the SPVs so as to make them lean and agile towards achieving the desired objectives.

He also insisted on enhancing operational performance of Dredging Corporation of India and importance of multimodal connectivity.

Also to increase the port performance, Shri Sonowal suggested all the ports to develop independent feedback mechanism to identify gaps and resolve  them in consultation with all the stakeholders. It also proposed 100% financial assistance for developing dedicated coastal berths at ports through Sagarmala programme and to offer more berths on PPP mode.

It was suggested by the Minister that all ports must explore way of adopting the intervention of VHF technology at their ports. The Green Ports Policy was also discussed, which will be applicable for all the major and non-major ports of India. The draft policy also suggested port authorities to explore the option of project financing through multi-lateral development banks/other financial institutions/any green financing agencies.

Shri Sonowal concluded that the  reflections from the ‘Chintan Baithak’ will help create the roadmap to put India as one of the world’s maritime leaders.

Depth of Major and Minor Ports

Wait over as Chennai Port offers shore leave to sailors