JNPT is going to become a mega port in the near future – whatever top-class facilities are needed to be incorporated, will be done effectively:  Shri Sarbananda Sonowal
“PM Gati Shakti scheme will strengthen the country’s economy in a short time”

Union Minister of Ports, Shipping and Waterways and AYUSH Shri Sarbananda Sonowal visited Jawaharlal Nehru Port Trust (JNPT) in Mumba. During his day-long visit at the Port, Shri Sarbananda Sonowal inaugurated the ‘Bhumipoojan ceremony’ of the JNPT Concrete Road Facility Project at Karal junction and visited JNPT’s state-of-the-art Centralized Parking Plaza to review its tech-enabled operations at the CPP command centre. Over there, the Minister also interacted with container truck drivers, who are an integral part of the maritime supply chain. Thereafter, Shri Sonowal inaugurated a medical oxygen plant at JNP Hospital. The Minister also reviewed a presentation on terminal operations at the GTI House and boarded a vessel, followed by his visit to JNPT’s multi-product SEZ and Hind Terminal CFS. Also, the Union Minister explored ‘Smart Port Initiatives’ undertaken by BMCTPL and reviewed the progress of its phase two expansion. 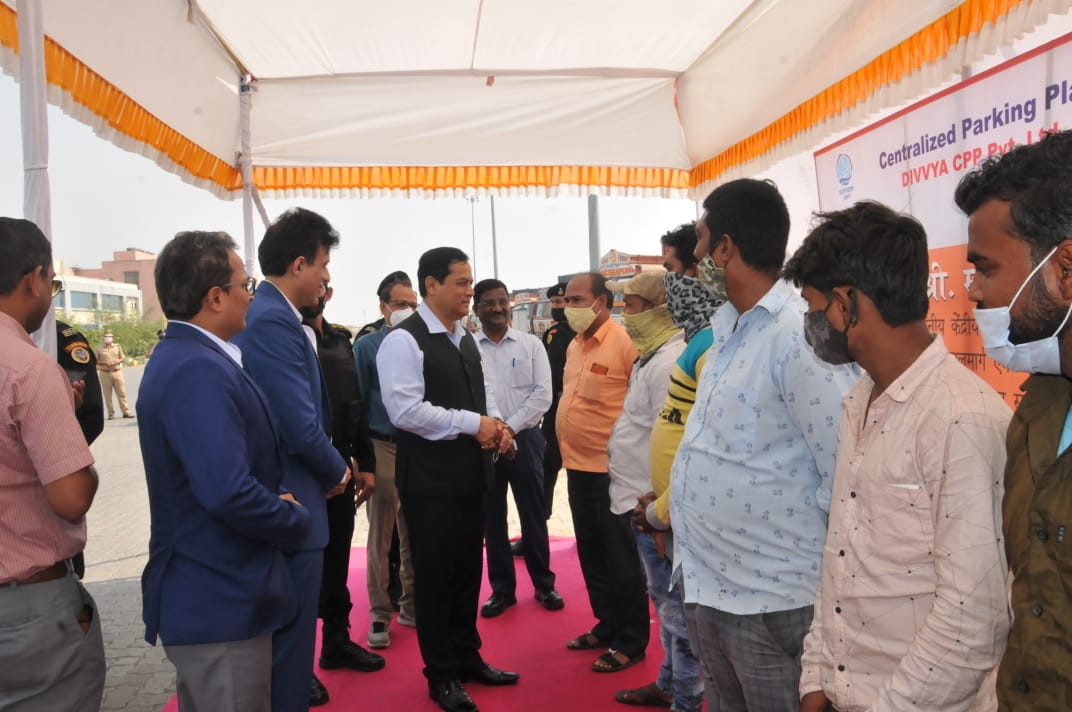 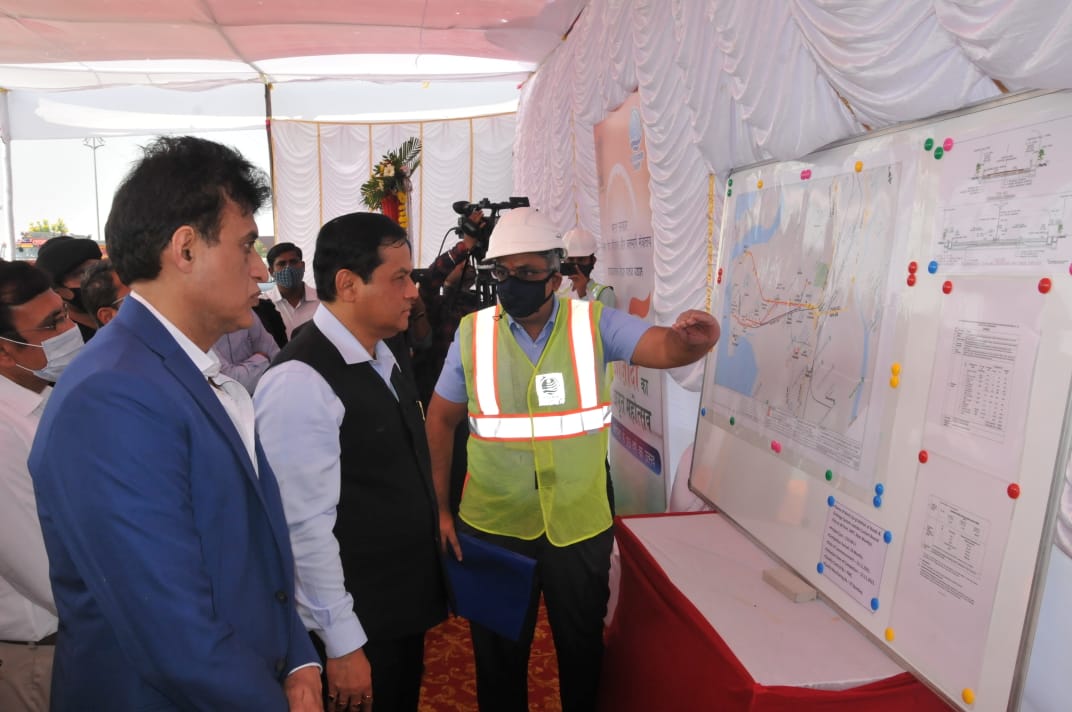 While addressing a press conference, Union Minister Shri Sonowal stated, “JNPT is going to become a mega port in the near future. That is the vision plan we have in mind. For this, whatever top-class facilities are needed to be incorporated to provide the best-possible support to the users of the port will be done effectively” He further said, JNPT has been successful in earning a name for itself as the biggest container port in the country, which is at par with the global standards. JNPT is serving the country with commitment, he added. Referring to the state-of-the-art truck terminus of the port, the Minister said, JNPT has taken a praise-worthy step towards Ease of Doing Business. The Minister also informed that JNPT has utilized modern technology to provide facilities for reducing turn-around time of loading and unloading to 26 hours.

The Minister remarked that JNPT will move further ahead in the coming days and play a big role in strengthening the country’s economy and exporting our farmers’ products to foreign countries. JNPT officials are working with the spirit of Team India, which has helped them to be successful”, he said.

The Port Trust has taken a number of initiatives by which exporters and importers are going to be benefitted, he added. 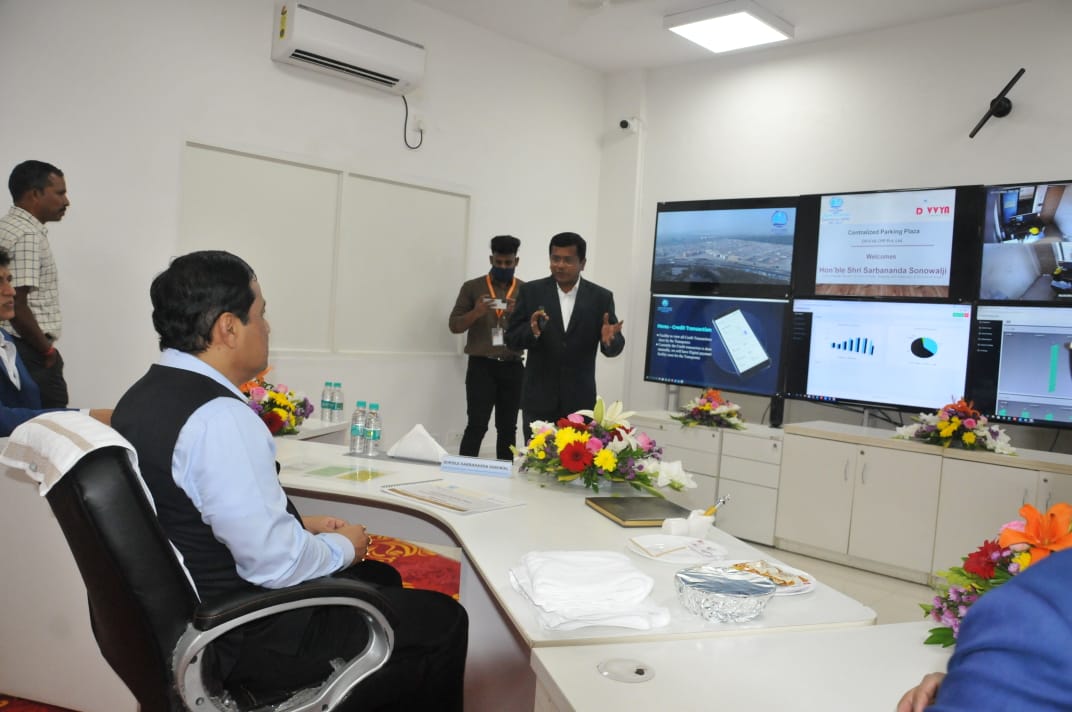 Referring to the PM Gati Shakti scheme, Shri Sonowal said, the integrated effort which is being taken by various ministries will add speed in development works around the country. He said, this scheme started by PM Shri Narendra Modi, which brings different departments and ministries together to work in tandem with the same purpose, with integrated and co-ordinated efforts, will certainly be beneficial for the citizens. Referring to JNPT’s Special Economic Zones, the Minister said, SEZs are an important component of the Gati Shakti scheme. If all means of connectivity, be it waterways, airways or railways, are brought together and they play their role unitedly for the purpose of trade, or even providing the facilities to people within proper time, then the country’s economy will definitely be strengthened in a short time. General public also have a big role to play in this matter, the Minister added.

In reply to a question on container shortage, the Minister replied that a committee headed by the Additional Secretary in the Ports, Shipping and Waterways Ministry, has been formed to find a solution for this big issue in the entire country. “All the concerned ministries have put up efforts in the right perspective”, added the Minister.

Commenting on the visit of the Union Minister, JNPT Chairman Shri Sanjay Sethi said, “The Union Minister’s visit provided an opportunity for our Port stakeholders to directly engage with the minister and share their perspectives on India’s growing maritime sector and how maritime policies under his leadership can contribute to its overall growth.”

JNPT officials also briefed the Union Minister about multiple initiatives undertaken by the Port to enhance Ease of Doing Business, including the recently launched ‘Dwarf Container Train’ service and the status of Vadhavan Port and other JNPT-led infrastructure projects.

Earlier in the day, Shri Sanjay Sethi, IAS, Chairman, JNPT, and Shri Unmesh Sharad Wagh, IRS, Deputy Chairman, JNPT, welcomed the Union Minister, where he was accorded a guard of honour by the CISF personnel stationed at JNPT.