Twelve fire fighters were among the 49 dead in Saturday’s chemical laden container blast in a Chittagong depot which burnt over a thousand loaded boxes causing financial loss of nearly US$100 million, as estimated.

It took 25 hours to bring the devastating fire under control, blaming the presence of dozens of hydrogen peroxide laden containers  behind the delay, at the depot namely BM container depot, located at 25 kilometres away from the port city of Chittagong. 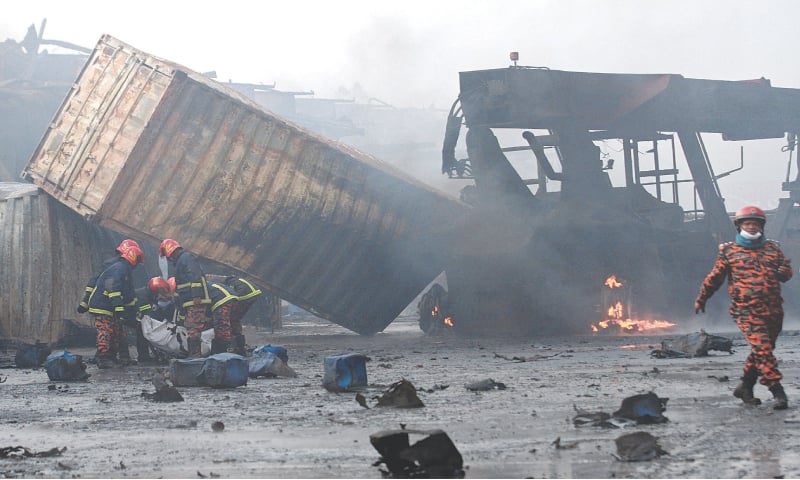 A top army official while talking to newsmen in the depot area on Sunday evening hoped to bring fire under full control by 10 PM local time.

Army personnel have built dam to prevent leakage of chemical contaminated water to the Bay of Bengal from the depot area.

Chittagong civil surgeon Ilias Chowdhury said 49 people died so far from the fire incident while hundreds are getting treatment in various hospitals with severe burn injuries. Some seriously burnt people were flown to Dhaka for better treatment as they were in critical position.

Fire fighters are expecting more bodies from the depot area once the fire is doused finally. Some bodies were found fully burnt and only 17 could be identified so far.

From the Sunday afternoon the fire fighters found to be removing the undamaged containers from the depot to a safer place.

Ruhul Amin Sikder, secretary general, Bangladesh Inland Container Depot Association, said there were some 1,300 laden containers in the depot at the time of fire of which 800 were carrying export goods and 500 import goods.

He said majority of the containers were burnt in the incident causing financial loss of at least US$100 million.

Sikder said majority of the burnt containers were carrying export goods which were scheduled to be shipped in a day or two.

He said a huge number of empty containers were also burnt to ashes as fire could not be doused fast.

Vice president of Bangladesh Garment Manufacturers and Exporters Association (BGMEA) Rakibul Alam Chowdhury said the financial loss from the burning of containers may be US$100 million or more.

He said the BGMEA has issued a notification to its members to let it know containers of how many exporters and how much in value were burnt in the fire.

Depth of Major and Minor Ports

Wait over as Chennai Port offers shore leave to sailors