Home Shipping Why Are Shipping Containers Stacked At Sites Around Suffolk?

Felixstowe is the UK’s busiest container port but it is not the only place in Suffolk where shipping containers are being stored. In recent weeks, large stacks of them have been appearing at locations around the county, leading to questions about why they are there – and what they contain.

Where Are Containers Being Stored?

At least four major locations across Suffolk have been identified – the Eye Airfield trading estate; Mendlesham Airfield; land near Melton train station and at the Port of Ipswich.

The site at Eye, which has swelled over the past few weeks, is owned by the car and commercial vehicle company the Roy Humphrey Group. The firm said it was not a permanent arrangement.

Partner Oliver Humphrey said: “We were approached by a local haulage firm to store the empty containers on the land.”

There are currently about 1,000 containers stored there.

Land Registry searches reveal that the other site where dozens of containers are being stored, a few miles down the A140 at the former Mendlesham Airfield, is owned by haulier Gary Banham.

The container storage site at Melton, near Woodbridge, is operated by Qube – a firm that supplies, repairs and rents shipping containers.

Neither Mr Banham nor Qube have been available for comment.

What’s Inside The Containers? 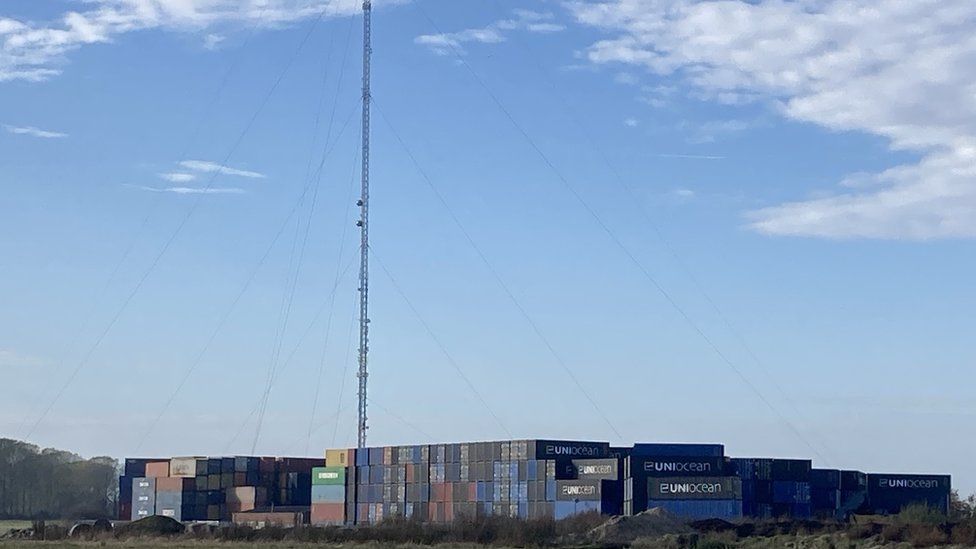 Containers being stored at a yard in Mendlesham, Suffolk

This has been subject to intense local speculation. There have been reports some have been filled with personal protective equipment but the BBC has been unable to verify that claim.

At Eye Airfield, Mr Humphrey said the containers there were empty.

The Port of Ipswich said it did not know what was inside the containers on its site.

In Mendlesham, an employee, when asked what was inside the containers, kicked one to demonstrate that it was empty.

Eleanor Hadland, senior analyst for ports & terminals at maritime consultants Drewry, said the containers on sites like this were “more likely full of fresh air”.

Why Are The Containers Piling Up? 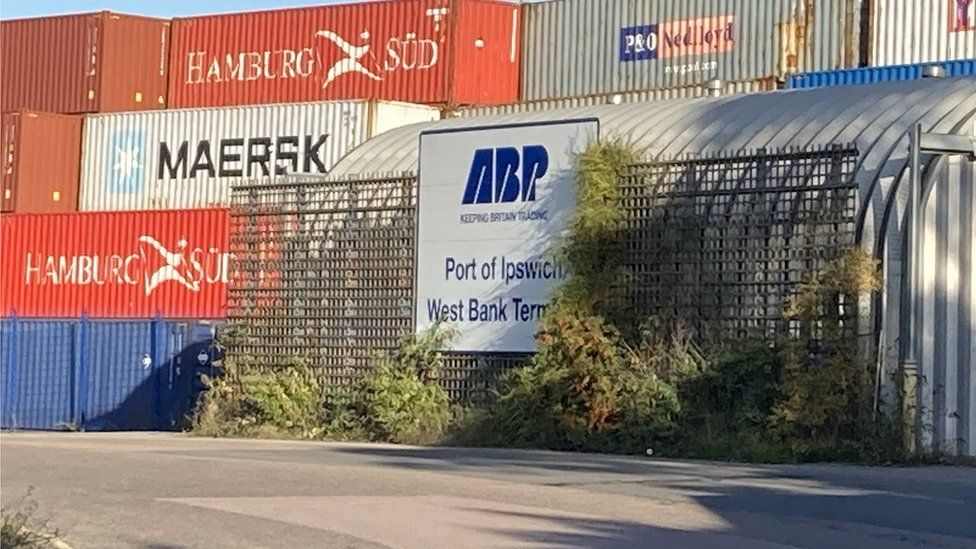 Industry sources said ports were geared up for transit operations and not for longer term storage.

The Port of Felixstowe has faced a build-up of both full and empty shipping containers due to extraordinary market conditions caused by disruption to global shipping.

This has been exacerbated by the ongoing global impact of Covid and increased UK consumer demand.

Ms Hadland said in normal operating conditions the empty containers would have been reloaded back on ships heading back to Asia.

There is also uncertainty over ship arrival times.

“It means that ports are getting ever more congested with import cargo and they don’t have space to receive these empty containers back into the system,” she said.

“Suppliers are also prioritising being on time for the next port of arrival, so often sailing promptly at the end of their berthing window, rather than waiting to load the many, many empty containers that need to moved back towards Asia.”

She said the pandemic led to an initial lull in activity followed by a boom in demand, which has “pushed the whole system out of balance”.

“The UK is certainly not alone,” she said.

HGV driver shortages are also contributing to the disruption, which in turn means many empty containers are going uncollected.

Rob Hollyman, from Youngs Transport and Logistics in Essex, said: “It’s been a perfect storm – it really has.

“You’ve got a shortage of drivers, you’ve got the container issue, you’ve got Brexit and all of this is coming together to make logistics a very difficult game.”

The Port of Felixstowe told the BBC it was getting back to normal operating conditions.

When Will The Supply Chain Disruption End? 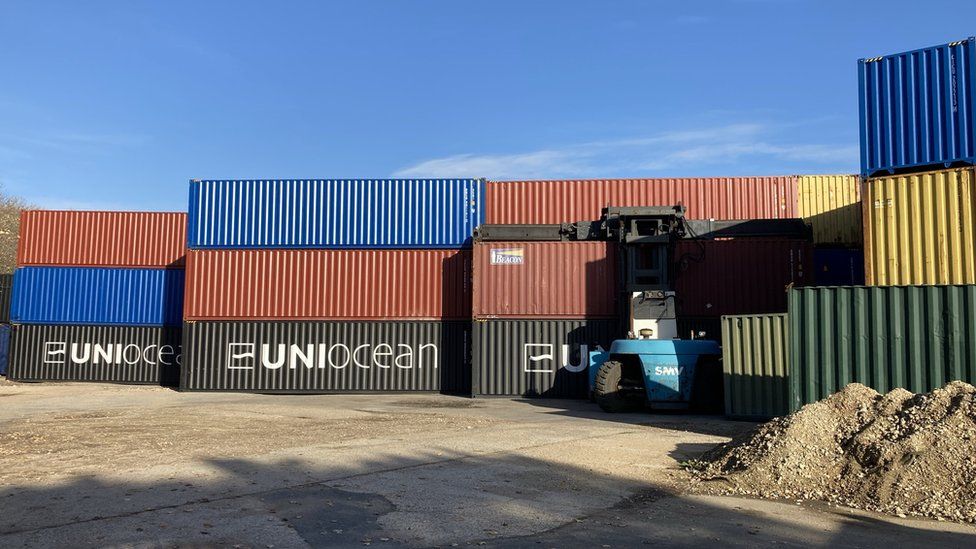 Global supply chain disruption and ships not taking away empty containers are being blamed for stockpiles, such as this one at Melton in Suffolk

Ms Hadland said: “Supply chain managers now have very much moved into a far more defensive ordering position and are therefore expecting to see the disruption to carry on into probably towards the back end of 2022.

“People are starting to order goods far more early than they otherwise would have done in pre-Covid times because they can’t be certain about how long it’s going to take to get those goods into the country.

“So when we look towards next year, we’re going to see lots of traditional summer products moving into the country a lot earlier than they otherwise would have done, such as barbecues or garden furniture.

“That type of thing is moving across from Asia far, far earlier, and that’s not going to give us a much-needed break in demand for any kind of catch up and reorganisation of the supply chain.”

In response to the supply chain issues, the government said it would grant up to 5,000 temporary visas for HGV drivers from abroad.

It also announced it would make temporary changes to cabotage rules, which govern how many jobs a haulier can make in a foreign country.

Chancellor Rishi Sunak told the BBC ministers were doing “absolutely everything we can” to fix supply chain issues.

The Department for Transport has previously said that fluctuating capacity at ports “has been exacerbated by the ongoing global container and HGV driver shortages”.

“All ports across the UK remain open to shipping lines, with Felixstowe reporting improved capacity over the past few days and the government continues to work closely with the freight industry to tackle the challenges faced by some ports this autumn,” a spokesperson said.

Kochi to get new logistics park in six months: Minister